My small revenge on Apple

August 04, 2021
Once upon a time, Groups was an app that accepted two "social logins": Google and Facebook. All was well.

Apple, a company known for enclosing its customers in walled gardens, decided this was a threat to their business model.

How could developers have their prisoner's name and email addresses? What would be next, sending personalized emails offering alternative payment methods? This simply could not be

But now Apple had to convince their fans that their "Apple ID" was better than the one they were used to. And so they used their two favorite methods: hype and extortion 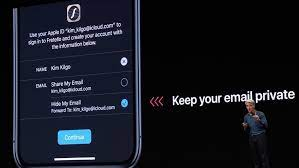 Church time: today you will learn why it is so important to keep your email private from everyone but ourselves
The best way to convince Apple prisoners is to tell them what they need. Trust must only belong to Apple. Give them your money, your will, your worship, your everything. Apple will keep you safe
Extortion
Apple didn't just start to "offer" the new Apple ID so that developers could use it. Oh no. Perhaps Apple customers deserve the luxury of "choice" (between different Apple devices, of course). But Apple developers must be told, threatened, shut down if necessary.
Apple introduced Point 4.8 to their review guidelines: Apps that use a third-party or social login service (such as Facebook Login, Google Sign-In, Sign in with Twitter, Sign In with LinkedIn, Login with Amazon, or WeChat Login) to set up or authenticate the user’s primary account with the app must also offer Sign in with Apple as an equivalent option
Now all they had to do was sit and wait. Didn't even have to bother to provide a functioning API. This new thing we're forcing you to use doesn't work? Whatever!
The "guidelines" were so restrictive that they literally made user experience worse. For example, Apple - in their perfect wisdom - decided it was best to not let anyone choose what design the Apple ID log-in button could have. It had to conform to very specific specifications. The consequence of this was that apps that had other Social Logins now had to either (a) conform all other social login buttons to Apple's design or (b) look ugly and inconsistent

This looks so good I am sure it will now go through App Store review. Thank you Apple
Revenge
How can we (developers) possibly do anything about pushing back on Apple? "Our" users want us to offer our services on Apple devices, but Apple wants us to almost pretend all the work we do is in fact done by Apple. We are denied customer interaction, freedom to offer any non-Apple payment methods, etc. For example, I am absolutely sure that Groups would have had loads of more IAPs had I been allowed to offer Paypal on top of Apple Pay and what not
I really wish I could delete all Groups' Apple presence because developing anything that runs on Apple has become so extremely annoying. I already shut down Group's Mac version when they introduced Notarizing. Literally spent 3 weeks trying to make Groups work and in the end I just decided it was not worth the effort
3 Weeks ago Google temporarily removed Groups from their Google Play store with no warning. This has led me to start working on a "web" version that will withstand the whims of big tech
So here is my small revenge: I am refusing to port Apple ID to the web version. Apple users who logged into Groups via the app with Apple ID will need to create a second account. Am I hurting myself? Am I shooting myself in the foot? Probably. But this is war 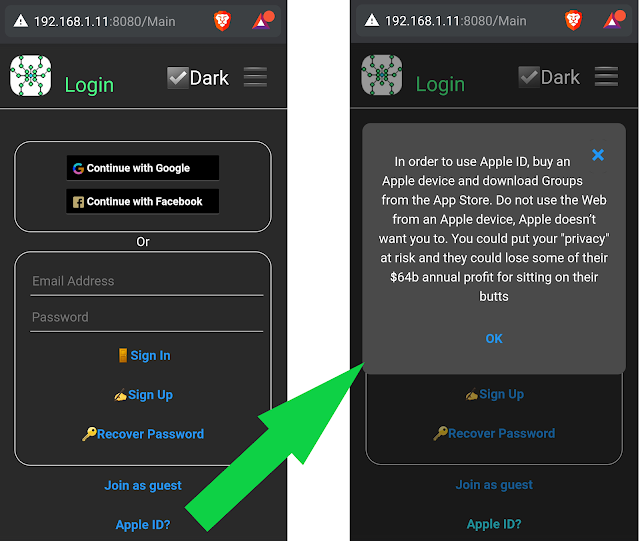 Link to Hacker News post
Edit:
After some thoughtful discussion on Hacker News, I have decided to implement a transition mechanism for existing AppleID users so that they can also use the web app.
The message will read "Apple required us to choose between either supporting Sign-in with Apple in the iOS app, or disabling the logins of all existing users who had signed in with Google and Facebook. In protest of these abusive requirements, sign-in with Apple will not be supported online" instead of the "sitting on their butts" one

Popular posts from this blog

My app just got removed with no prior warning

My app just got de-listed from Google Play with no prior warning. The reason: My app correctly offered a privacy policy link in its Google Play listing ( https://www.groupsapp.online/privacy-policy ) and it also showed a link within the app's login menu: Furthermore, a link to the website (where the privacy policy can also be found) was offered in the help menu: App: Website: So the only case where the privacy policy could not be found (in the app), was when a user had already been offered to see the privacy policy and had proceeded to log in I agree that it should always be accessible (which it is via the "website" button) Anyway, I proceeded to upload a version that includes a permanent link to the privacy policy, but then was presented with the below (forgot to take a screenshot of this one): It can take up to 7 days to process your request These are my conclusions:     1) Unexpectedly pulling an app with no warning  and then imposing a 7-day review period is not rea
Read more